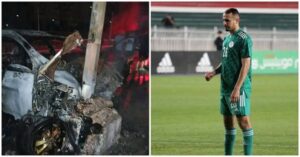 The 24-year-old died in a tragic car accident while he was on his way back home after featuring in a friendly game for the Desert Foxes against DR Congo.

In a post on Twitter by Algerian Football Association, the death of the attacking midfielder was confirmed.

The player was involved in a car accident on Thursday night while returning with a friend to his home in the city of Hajout, about 70 km from the “July 5” stadium in Algiers.

Hamouda is one of the most prominent players in the Federation and the National Championship during the past few years.

His death has left African football in pain as they deal with the devastating effect of Benhamouda’s unfortunate demise.

Previous Ondo attack: “Some people were arrested in the bush” – Owo monarch
Next Why Northern Governors Picked Tinubu Over Osinbajo – El Rufai Reveals