Home / cover / Ondo attack: “Some people were arrested in the bush” – Owo monarch

Ondo attack: “Some people were arrested in the bush” – Owo monarch 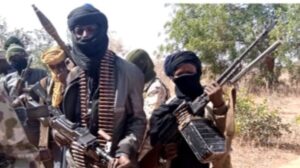 The Olowo of Owo, Oba Ajibade Ogunoye, on Friday said although some suspects were arrested in the bush by security agents on Thursday, authorities are “not sure” if they were the ones behind the terrorists’ attack on a Catholic church on Sunday.

POLITICS NIGERIA reports that a Punch correspondent had during a Facebook Live on Thursday claimed that Oba Ogunoye announced the capture of some of the Owo church attackers.

YOU MAY ALSO LIKE:   Revenue Generation: CBN imposes additional charges on transactions on individual bank accounts

The scene caused reinforcement of security in the palace.

However, speaking to the press today, the monarch denied saying the Owo church attackers have been arrested.

“They said some people were arrested in the bush by the security but said they were not sure that the suspects were the ones that carried out the attack,” Punch quotes the monarch as saying.

The people who saw the suspects in the police van thought they were the attackers and they had been taken to the palace, hence the besieging of the palace by residents.

Tags Ondo attack: “Some people were arrested in the bush” – Owo monarch