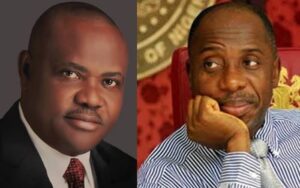 The Governor of Rivers state, Nyesom Wike has directed the filing of criminal charges against former Governor Chibuike Amaechi, over alleged N96b fraud.

Wike, on Friday, ordered the state Attorney General to commence legal action against his predecessor following a Supreme Court judgement that dismissed the latter’s appeal against probe by a Judicial Commission of Enquiry.

They were accused of converting state assets for personal use.

THE WHISTLER reported that the apex Court had on May 27 held that the state’s Judicial Commission of Enquiry which was established to probe his administration was constitutional.

But he urged the apex court to stop the body from probing him, adding that it was mere political witch-hunt.

However, the apex court dismissed his appeal for lacking in merit.