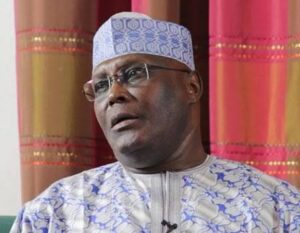 The Gombe offices of Peoples Democratic Party (PDP) and Atiku for President 2023 were on Tuesday attacked by hoodlums.

They looted the office, razed furniture and carted away valuable property, including air conditioners among others.

The North East Coordinator of Atiku for President 2023, Dr. Adamu Bappayo, who addressed journalists in Gombe, expressed shock over the incident.

He said he could not give any reason for the attack because former Vice President Atiku Abubakar is a peace-loving gentleman.

“I received a call on my phone around 2 am informing me of an attack on the building by hoodlums I do not know what can warrant his kind of attack because my principal, Vice President Atiku Abubakar is a peace-loving man.

“He has a smooth relationship with the Governor of the state, Muhammadu Inuwa Yahaya and many other personalities across the state,” he said.

According to him, the matter has already been reported to Commissioner of Police and the DSS, which requested for a comprehensive statement on it.

As at the time of filing this report, Gombe PDP chairman, Abnon Kwaskebe is holding a meeting with the State Commandant of the Nigeria Security and Civil Defence Corps (NSCDC).