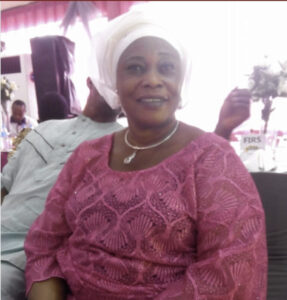 Adefila was reportedly on her way to work in the early hours of Friday, January 28, 2022, when she was confronted by heavily armed assailants opposite Awalu group of schools in Laketu, Ikorodu.

According to onlookers, a voice among the armed men was heard yelling, “that’s her, that’s her,” and they promptly attacked her and chopped her to death on the spot with an axe, cutlass, and knife.

Although some good Samaritans attempted to take her to the hospital in the hope that she would survive the senseless mutilation, she had lost a great deal of blood due to the severe injuries she had sustained on every area of her body, including her head and spine.

The deceased’s family has pleaded with the police and other appropriate authorities to expedite the investigation into their daughter’s death.

Alaba Jobi, speaking on behalf of the family, stated, “What made the crime even more shocking and terrible was that she was scheduled to attend a celebration that day in the office to celebrate her promotion to a new level in her office.”

“Many have wondered, ‘What could have prompted this brutal and heinous murder?’”

“Another surprise was that none of her personal items or body parts were stolen.

YOU MAY ALSO LIKE:   Fidelity Bank's Courtesy Visit to the Office of the Senate President of Nigeria

“Police must act immediately to apprehend those responsible for this horrible act. The mother of five children should not perish in vain. Mr Adefila, the husband, also seeks justice,” stating that Ikorodu, which was once a tranquil neighbourhood, has been blighted by a slew of criminal activities that has become nearly permanent in the area.

YOU MAY ALSO LIKE:   Six Men In Police Net After Inserting Long Stick Into Anus Of A 16-Year-Old Suspected Thief

Adekunle Ajisebutu, the state police command’s spokesperson, confirmed the incident and stated that the state’s police are “working vigorously to apprehend the offenders.”

YOU MAY ALSO LIKE:   Yuletide Message: “Don’t Give Up,” AMPON Tells Nigerians

Additionally, he added that Abiodun Alabi, the state commissioner of police, has authorized a thorough inquiry into the event.