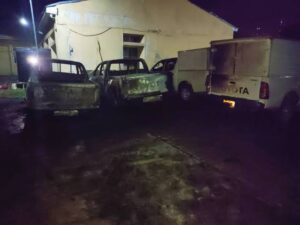 The Chief Fire Officer in Enugu State, Chief Okwudili Ohaa, confirmed the incident to the News Agency of Nigeria (NAN) in Enugu.

Ohaa said that a distress call was received by the Enugu State Fire Service at about 1.30 a.m.

“As usual, when we received the distress call our trucks and men at Ozalla Station quickly moved to the scene.

“Our prompt intervention saved the entire complex as only one office room was affected in the raging fire before it was extinguished,’’ he said.

Ohaa said that the quick response of fire fighters gave credence to the establishment of fire stations in local government areas by Gov. Ifeanyi Ugwuanyi.

“With the development, it is important to note that the state’s residents and infrastructure are now benefiting from massive investment of Gov. Ugwuanyi in building and equipping new fire stations throughout the state,’’ he said.

There are feelers that the arsonists climbed through the perimeter fence to gain access to the INEC complex.

YOU MAY ALSO LIKE:   Buhari Govt Will Curb Insecurity With Use Of Drones, Others – Garba Shehu

Efforts made by NAN to get the police and INEC officials to speak on the incident proved unsuccessful as they did not pick their calls.

Arsonists had earlier in the year attacked the INEC Headquarters in Enugu State and the INEC office in Udenu Local Government Area of the state as well.

Previous Obadiah Malafia Told Me He Had Malaria And Cattarh Two Days Ago, Says Cousin
Next (VIDEO) “He is our Capo and we are ready to follow Him” – Akeredolu Declares Support For Tinubu