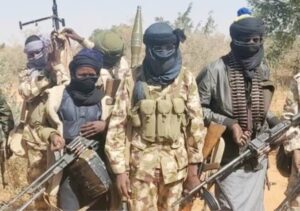 No fewer than 76 security operatives, comprising 13 soldiers, five policemen, and 58 vigilantes, have been reported dead following a series of attacks by bandits across Kebbi State in the last two days.

At Kanya, a village in the Danko-Wasagu district of Kebbi State, the bandits reportedly killed 19 security personnel and one vigilante.

According to the news agency, the bandits had overpowered the personnel, leading to the death of 19 officers, comprising 13 soldiers, 5 policemen and one vigilante.

Eight other security personnel, including four soldiers, were hospitalised with wounds while the remains of the deceased have been reportedly taken to Zuru Local Government Area (LGA).

The incident came barely 24 hours after about 57 vigilantes were reportedly killed around Sakaba village on Monday.

“We believe they were the same bandits who killed the vigilantes that attacked our village,” a Local resident Musa Arzika told the medium.

President Muhammadu Buhari had on Tuesday condemned the attack and killings of the vigilantes. He assured Nigerians he “will do all it takes to tackle this monster decisively”.

He said, “While extending my sympathy to the families of the victims of this savagery, let me use this opportunity to also call on our security forces to be more proactive and redouble their efforts in order to frustrate the operational plans of the terrorists before they even launch attacks”.