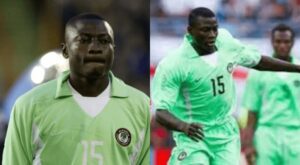 A former Super Eagles player, Justice Christopher has died in a hotel.

The forty-year-old made his debut for the Super Eagles in 2001 with 11 appearances.

He participated at the 2002 FIFA World Cup, featuring in all Nigeria’s three games before elimination.

According to reports, Christopher collapsed in his hotel room in Gwolshe, off Tudunwada Ring Road in Plateau State.

He had reportedly been diagnosed with high blood pressure.