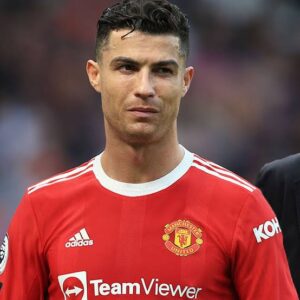 Ronaldo 37, signed a two-year deal at Old Trafford in 2021 with the option to extend for another year.

Outrage has sparked the news which is coming amid Erik Ten Hag’s plan to reposition the club to wining ways.

United are looking to boost their squad with Frankie de Jong of Barcelon as a majore target, but no deal has been reached.

The Athletic, reported that Boehly had a conversation with Ronaldo’s agent Jorge Mendes where the five-time Ballon d’Or winner’s future was discussed.

There has been no official bid supporting the claims.

A source at United told the Mirror Football that, “Cristiano is not for sale. We want – and fully expect – him to be with us next season.”

But the news is sparking debate over the possibility of another exit from United, a club he joined in 2003 from Sporting Lisbon for £12.24m, before moving to Real Madrid and Juventus.

On his return to United, Ronaldo scored 24 goals in all competitions but United endured a miserable season.

The news has sparked trends on micro-bloging site twitter as ‘Christiano Ronaldo’ and ‘Ronaldo to Chelsea.’

Popular Nigerian influencer, Auracool with ID @tweetoracle tweeted, “Ronaldo to Chelsea doesn’t make sense. Chelsea should be building a stronger squad with younger hungry players to rival Man city & Liverpool instead of looking to acquire finished commodity. With all Due respect,CR7 is great but way past his prime and selfish on the field of play.”

YOU MAY ALSO LIKE:   Election Violence: FG Approves Automatic Employment For Families Of 10 Slain Corps Members

Also, @langatwycliffe7 tweeted, “Ronaldo to Chelsea should be considered one of the most scam to ever happen in history.”

In the same vein, @IshanDeb7 said, “If Ronaldo to Chelsea actually happens, it will be a dream come true for all Chelsea fans who stan Ronaldo.”

Similarly, @ALABIomo_ologo tweeted, “We went from Neymar to Chelsea, now its Ronaldo to Chelsea. At this point the rumors are getting really annoying.”

YOU MAY ALSO LIKE:   I Ran To Benin Republic After Discovering Buhari's Administration Might Kill Me – Banji Akintoye Opens Up
How Fans Are Reacting To Possible Transfer Of Ronaldo To Chelsea 2022-06-27
Oluwasegun Adesuyi
Share

Previous Tension in Badagry as Fulani Behead Driver, Stab Conductor To Death Over Cow
Next How my Wife Was Used as Bait to Arrest me in Benin Republic — Igboho