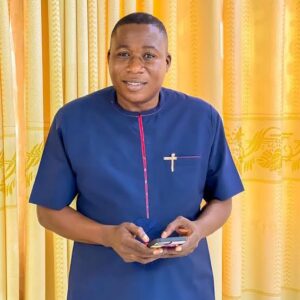 Yoruba Nation agitator, Sunday Adeyemo aka Sunday Igboho has stated that his wife, Ropo was used as a bait to arrest him, while traveling to Germany last year.

Igboho, who was arrested by security operatives in Benin Republic, has disclosed that he would soon return to Nigeria.

Narrating how he was arrested, he said: “My wife (Ropo) was detained at the (Cadjèhoun) Airport for about two hours. They were ready to hold onto her if I didn’t show up.

“Then I showed up and the security agents handcuffed my hands and legs. If I knew that could happen, I wouldn’t allow her to follow me to the airport.

“She had already obtained my travelling document from the German government and I would have asked her to go separately but God knew how everything went that way”, he added.

In the meantime, speaking on when he would return back to Nigeria, Igboho, who is at Cotonou, the Republic of Benin said: “I am going back to Nigeria soon.”

When asked how soon because the DSS declared him wanted, Igboho referred to the September 2021 judgment by Justice Ladiran Akintola of Oyo High Court, which declared the action of the DSS illegal, “arbitrary aggression and prejudices” and awarded N20bn damages against it.

YOU MAY ALSO LIKE:   "GET YOUR REMITTANCES IN DOLLARS"- ECOBANK
How my Wife Was Used as Bait to Arrest me in Benin Republic — Igboho 2022-06-27
Oluwasegun Adesuyi
Share