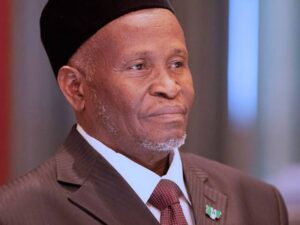 Nigerians were greeted with the news of the chief justice of Nigeria, Tanko Muhammad resigning from his position willingly, citing health related issues as reasons behind his actions.

This was an unexpected development as the CJN and top judiciary officials were still in an argument last week when the former was accused of diverting funds for his children’s political ambition.

YOU MAY ALSO LIKE:   BREAKING: One policeman killed, scores wounded As Task Force, Okada Riders Clash In Lagos

However, records have it that popular prophet, Primate Elijah Ayodele had revealed in January 2021 that the incapacity of the chief justice of Nigeria will soon be exposed as he had seen it in the spiritual realm.

Over one year after, the truth about the incapacity of the chief justice of Nigeria has finally been exposed as prophesied by Primate Ayodele and surprisingly, it was exposed by the chief justice himself when he can no longer hide it.

This has fulfilled the prophecy of Primate Elijah Ayodele, just as many prophecies of his has been fulfilled to God’s glory.

In Nigeria and Africa, there is no prophet that is as vocal as Primate Ayodele and he has a record of prophesying on issues no other man of God dares talk about. His prophetic releases hit the internet almost on a daily basis apart from the new year prophecy and his annual book of prophecy titled Warnings to the nations.

Previous How my Wife Was Used as Bait to Arrest me in Benin Republic — Igboho
Next Gbajabiamila is pride to Lagos, face of effective legislature – Lagos Assembly