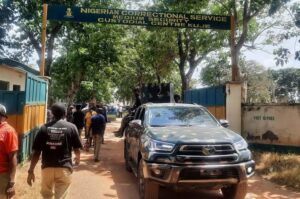 The National Correctional Service (NCoS) on Monday, confirmed the death of an inmate in the Kuje medium security custodial centre.

The correctional service spokesperson, Chukwuedo Humphrey confirmed the development following unrest in the centre earlier in the day.

Humphrey disclosed that the deceased was earlier diagnosed with some chronic ailments upon a mandatory medical examination in 2019 when he was admitted into the centre.

“He was immediately placed on special medical management by a combined team of medical personnel in the facility as well as occasional referrals to the University of Abuja Teaching hospital, Gwagwalada, Abuja when necessary.

“Unfortunately, when the inmate’s health deteriorated over the weekend, all effort by the medical personnel to resuscitate him failed,” the statement read.

However, reports revealed that the inmate had recently fallen ill and was being treated by medical personnel before he was referred to the teaching hospital.

The inmate was reportedly scheduled for a medical appointment today when he had his last breath.

But the Controller of the Command, Ahmed Ahmed while expressing his condolences, reassured his commitment to upholding the health and general welfare of the inmates and staff of the facility.

YOU MAY ALSO LIKE:   Buhari snubs Atiku as he clocks 75

“He further advised those on special medical attention to ensure strict adherence to expert instructions to overcome health challenges since drugs are available to them at no cost,” the statement said.

Previous 2023 Budget: We will Need to Borrow over N7trillion to Pay Petrol Subsidy – Minster of Finance
Next Abia First Lady Rescues Widow Accused Of Witchcraft