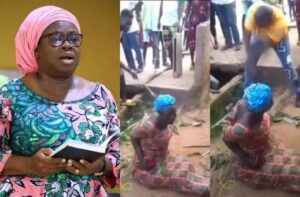 The wife of the Abia State Governor, Mrs. Nkechi Okezie Ikpeazu, has rescued one Mrs. Amarachi Okechi, who was accused of witchcraft, assaulted, and held hostage for several days in Umueghu Amaegbuato community of Nkpa in Bende Local Government Area of the state.

A video that went viral on social media at the weekend captured the moment Okechi, an alleged widow, was being flogged by youths in the community.

Mrs. Ikpeazu rescued the woman on Monday and arranged for her to be taken to a hospital for treatment, said her Chief Press Secretary, Chika Ojiegbe.

Ojiegbe said, “the First lady Mrs. Nkechi Ikpeazu is particularly thankful to the member representing Bende South, Emmanuel Ndubuisi, the Bende LGA Chairman and his wife Mrs Leticia Onwuchekwa, as well as the traditional ruler of the area, for the role in successfully extricating the woman from the volatile area”.

Okechi’s assault by the youths had attracted wide condemnation from the public.

Hon. Chijioke Chukwu, Minority Leader of Abia State House of Assembly, described the act as barbaric and wondered why the community should take laws into their hands.

He called on the Commissioner of Police in the state, CP Janet Agbede, to immediately arrest all those involved in the dastardly act.

The lawmaker also pledged to liaise with the DPO in Bende and Uzuakoli and officials of government from the area to ensure that all involved are identified, arrested, and punished according to the law.