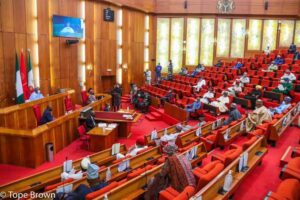 Members of the Nigerian Senate have been accused of diverting funds meant for constituency projects to non-existing projects.
The Independent Corrupt Practices Commission (ICPC) made the accusation in its interim constituency and executive projects tracking report, Naija News reports.

According to the report, the anti-corruption agency uncovered how the members of the Red Chamber illegally added N20 billion to N100 billion annual constituency projects.

The ICPC added that the lawmakers embedded additional projects into the 2021 mandate budget of MDAs, which is a long way affected budget performance, as well as distorted developmental planning and implementation of the 2021 fiscal year.

The report read in part: “Budget insertion remains one of the egregious, yet illegally acceptable phenomenon that has distorted the nation’s developmental planning and implementation of developmental programmes.

“In addition to the N100 billion appropriated annually for constituency projects, the National Assembly embedded additional projects into mandate budgets of MDAs. This is done to increase the project portfolios of concerned legislators and their influence on MDAs. The value of the insertion was in billions.

“Analysing the 2021 National Budget alone across key sectors of education, water resources, health, power, science and technology, environment, works and agriculture, we found duplication to the tune of over N20 billion.”

In the report, the ICPC cited other areas of infractions where lawmakers allegedly awarded contracts to themselves or to proxy companies.

This includes the “contract for the construction and renovation of blocks of the classroom at the Federal University Staff School, Wukari, Taraba South Senatorial District by a popular Senator“.

ICPC alleged that the project was “haphazardly nominated, appropriated and executed in locations that have no need for such projects.”

Another infraction pointed out by the ICPC was the supply of tricycles to Rivers West Senatorial District was an empowerment project, where the sponsor allegedly used one of her cronies as the contractor.

YOU MAY ALSO LIKE:   Family of Nine Die After Eating ‘Tuwo’ In Zamfara

The commission alleged that “while the contract was never performed, the sum (N30m) was fully paid and shared“.