List Of Some Of Alaafin Lamidi Adeyemi’s Unfulfilled Plans 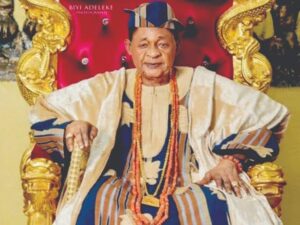 The Alaafin of Oyo, Oba Lamidi Adeyemi who died in Ekiti State on Friday night failed to carry out some of his plans before his death.
The well respected Yoruba monarch before his death had plans to visit the Ooni of Ife, Oba Enitan Ogunwusi.

Oba Adeyemi before joining his ancestors also had planned to install the Speaker of the House of Representatives Femi Gbajabiamila as Baamofin of Oyo.

The monarch also took steps to end the rift between the Minister of Interior Rauf Aregbesola and the National Leader of the All Progressives Congress, Bola Tinubu.

A source that spoke with The Nation disclosed that Alaafin had planned to hand over two new houses to two of his wives as gifts before the end of this month.

The source said: “Kabiyesi was waiting to get well. He planned to hand over a gift of new houses to two of the queens. But, death has made that impossible now. The houses have been completed. They were just to be handed over to the wives.”

It was gathered that the monarch had planned to meet with the Oyo State Government over the elevation of some chiefs and balee into obas without his consent and in violation of chieftaincy laws.

A source disclosed that the Alaafin of Oyo had written former Governors Rashidi Ladoja and Abiola Ajimobi on the issue, but no action was taken.

It was claimed that the monarch had planned to complain to the current Governor of the state, Seyi Makinde before his death.

The monarch had gathered relevant documents, which he planned to launch by end of April before death came.

In a 2017 letter to the late Ajimobi, the Alaafin had listed bales who elevated themselves to Obas and those who gave themselves non-existing titles.

“One seemed to believe that with these and a host of legislations on chieftaincy matters, both the administrators, prescribed authorities and the beneficiaries would be guided alright. It was very disappointing that self-esteem, corrupt practices, negligence, and carefree attitude by those concerned have led to great abuse and bastardization of the important culture. Dubious characters in our society now found the acquisition of chieftaincy titles at all costs a haven since the anointment is honourable for life. They manipulated their ways to the highest position, sometimes, to the disadvantage of some families. Criminals have invaded the culture.”

Tags List Of Some Of Alaafin Lamidi Adeyemi’s Unfulfilled Plans