Home / cover / I Hope To Hand Over A Secure, Prosperous Nigeria In 2023 – Buhari

I Hope To Hand Over A Secure, Prosperous Nigeria In 2023 – Buhari 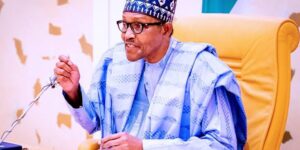 President Muhammadu Buhari has said he hopes Nigeria will be secure, prosperous and confident by the time he leaves office in 2023.

He made the remark in a 30-minute interview with the Nigerian Television Authority, which aired on Friday.

According to the President, he is committed to stepping down in 2023 and has no third term agenda, as the constitution allows for only two terms.

He added that the success of his administration will depend on the survival of his party, the All Progressives Congress, after 2023.

‘Security is Key’
The President argued on Friday that his administration was committed to securing the country from all forms of violence, including banditry and terrorism.

He said it was unfair to conclude that the police and military action currently ongoing in the South-East was a result of his dislike of the region.

“We have been deploying police and army to deal with bandits” in the North, the President said.

While stressing that security had improved since 2015, he said his administration still faces the challenge of acquiring the required weaponry and ammunitions to fight crime in all facets.

The number one thing is security, the President said, because if you don’t secure Nigeria, people will not invest.

He also condemned #EndSARS violence, noting that such actions were bound to drive off prospective investors.

Fighting Corruption
The President acknowledged that corruption remained a nagging problem and decried the difficulty of dealing with it under a democracy.

YOU MAY ALSO LIKE:   BREAKING: FCT minister tests positive for COVID-19

“It is difficult under this system,” he said. “When I was a bit younger, I arrested politicians and put them under restriction and told them they were guilty until proven innocent.”

However, he said majority of Nigerians believe his administration was doing its best under the circumstance.

He advocated for the creation of special courts to deal with corruption, noting that such an institution would speed up the hearing of financial misappropriation cases and ensure criminals do not cheat justice.

YOU MAY ALSO LIKE:   Just In: FG Rejects Governors ₦162 To ₦380/Litre Fuel Price Proposal

Grateful to China
The President said his administration has focused on building public infrastructure such as railways and roads, and acknowledged China’s assistance.

“We are grateful to China,” he said. “They have agreed to help us and they are helping us.”

He added that his administration has also prioritised the production of fertilizer in order to fight food insecurity.

The President said his administration’s decision to close the country’s borders for months has boosted agricultural production.

Previous JUST IN: Buhari to address Nigerians on June 12 at 7 am
Next Defend yourselves, Wait no more for security agencies – Matawalle to Zamfara people