Defend yourselves, Wait no more for security agencies – Matawalle to Zamfara people 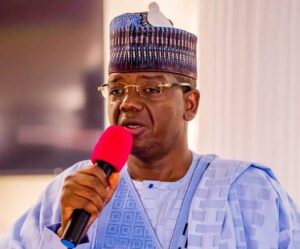 After recording another massacre of no fewer than 90 people in Kadawa village in Zamfara, Governor Bello Matawalle has told his people to defend themselves and wait no more for security agencies.

He gave the advice at a prayer session in Gusau, just after French speaking bandits invaded Kadawa village in Zurmi Local Government Area.

Matawalle said:“The insecurity situation has defied solution, and as such, people should defend themselves.

“I am calling on the people of the state to defend themselves if bandits attack them. My government has approved that whenever the bandits attack you, do not wait for the security personnel to come to your rescue. You should rise up and protect yourselves.

“My government has also planned to recruit the locals from each community who will be in charge of monitoring their villages to ensure that bandits do not attack the people.”

Matawalle called on traditional rulers and community leaders to ensure that only people of “proven integrity” were recruited.

He also urged traditional rulers to fish out the bad eggs in their communities conniving with the bandits.

The police in Zamfara confirmed Thursday’s attack on Kadawa village, where over 90 people were killed.

YOU MAY ALSO LIKE:   Fulani Kidnappers Kill Driver, Abduct 5 Others On Lagos-Ibadan Expressway

The Police Command Public Relations Officer (PPRO) in the state, SP Shehu Mohammed, made the confirmation to the News Agency of Nigeria (NAN) in Gusau on Friday.

“Yes, l can confirm to you that an attack took place at Kadawa village of Zurmi local government where bandits took advantage of the night to strike on unsuspecting people and killed them in cold blood.

YOU MAY ALSO LIKE:   Alerzo E-commerce platforms empowering retail businesses

“On getting the news of the attack, the Commissioner of Police, CP Hussain Rabiu, ordered combined units of security personnel to mobilize to the area, restore peace and confidence in the communities and track the perpetrators so that they can be brought to book,” Mohammed said.

“The CP, also in company of the Speaker of the state House of Assembly, Alhaji Nasiru Magarya, were at the affected community to condole with bereaved families,” he said.

NAN had gathered from some eye witnesses in the village that the bandits invaded the village mid Thursday, speaking French and shooting at anyone trying to escape in the pandemonium.

One of them who simply gave his name as Lawali said 67 bodies were recovered within the village while 26 others were picked up at different locations on the outskirts of the village with several others wounded.

Previous I Hope To Hand Over A Secure, Prosperous Nigeria In 2023 – Buhari
Next June 12: Teargas, gunshots as Lagos protesters storm Ojota