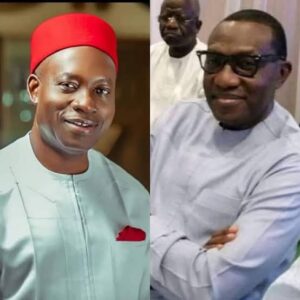 Recall that Professor Soludo was the CBN governor during the administration of former President Olusegun Obasanjo.

YOU MAY ALSO LIKE:   Death Threat over Blasphemy: Rahama Sadau Clears the Air

Speaking at a guber debate organised by ARISE TV, Senator Uba, who an aide and in-law of Obasanjo, claimed that he recommended Soludo to the former president.

The lawmaker described the former CBN governor as an ingrate, despite Obasanjo making it clear that he (Uba) influenced Soludo’s appointment.

“When he (Soludo) became the CBN Governor, he came to my house to say thank you. Also, when five Igwes [traditional rulers] came to thank the President after the appointment, he [Obasanjo] told them to go thank me instead,” Uba said.

Reacting, Soludo rejected Andy Uba’s claim that he was influenced his appointment as the Apex Bank boss.

The APGA guber candidate stated that he never knew Andy Uba until former Minister of Education, Dr Oby Ezekwesili, introduced them at the Presidential villa.