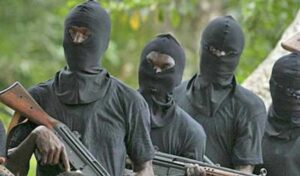 Speaking on the incident, the Indigenous People of Biafra (IPOB) alleged that Hope Uzodinma killed the INEC REC chairman.

They revealed that Uzodima carried out the atrocious act because the chairman did not allow him to bring his ad-hoc staff to rig the upcoming November 6 gubernatorial election in Anambra.

The allegations were revealed in a statement made by IPOB spokesperson, Emma Powerful.

The statement reads in part: “We want to again warn Ndi Anambra to be at alert and never allow Hope Uzodinma to succeed with his evil plan. For those who don’t know, Hope Uzodinma murdered the INEC REC Chairman in Anambra State because he turned down Uzodinma’s request to bring his agents as ad hoc staff for the November 6 governorship election to perfect his rigging plan.

“Nigerian security agents, both DSS (Department of State Services) supported Fulani in their desperate mission to Islamise South East which is impossible for them. There is nothing they can do to change our people in our irrevocable resolve to restore Biafra.

“Similarly, Nigerian Army is committing secret genocide in Biafraland, the whole world must take note of these atrocities and extrajudicial killings going on in Biafraland in the name of Operation Golden Dawn officers deployed in our land, particularly everybody must endeavour to watch the viral videos and pictures where Nigeria soldiers and its sister security (are) shooting innocent villagers in Awgu, Enugu State.

“Nigerian security agents were sent into our territory to commit another round of genocide against innocent citizens of Biafra, we wondered why Amnesty International, civilised (sic) would keep quiet and allow Nigerian military killing innocent citizens because they accept to become the upcoming Biafra Nation.

YOU MAY ALSO LIKE:   FIRSTBANK UNVEILS A FULLY AUTOMATED SELF SERVICE BRANCH, STRENGTHENS DIGITAL TRANSFORMATION IN NIGERIA

“We are calling owners and leaders of this world to come for our rescue Nigerian army and other security agents killing, murdering and massacring Biafrans extrajudicially without any justifications, what did we do to answer in the first place, what crime for answering (sic) Nigeria.

“Nigerian government and her security agents decided completely to reduce the population of Biafra, we want the world leaders to fix a date for Biafra referendum so our people can decide where they want to belong, we are tired of Nigeria and its Fulani agenda.”