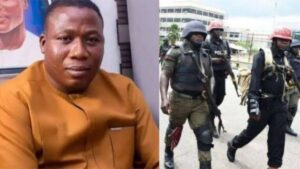 A leaked audio online has revealed how unidentified operatives of the Department of State Services disclosed that the residence of Yoruba Nation agitator, Sunday Igboho was invaded in July because he had given a hint while speaking carelessly.
The secret police officer who was believed to be on a call, also claimed that the arrogance and ignorance of the agitator were used against him.

According to the audio obtained by SaharaReporters on Tuesday, an ally of Igboho who knew him well was the informant used by the DSS operatives who invaded his residence.

YOU MAY ALSO LIKE:   ‘I Did Not Kill Super TV CEO’ – 21-Year-Old Chidinma reverses Initial Confession

Recall that operatives of the DSS invaded the residence of Igboho in Soka, Ibadan, killing two people and arresting twelve others.

The male voice in the audio noted that the unconscious statements of Igboho gotten from his close ally helped the DSS to raid his residence.

The tape was recorded in the Yoruba language with some use of the English language.

The voice said, “If you used to follow the things he said, he asked us to come at midnight. He didn’t know that God has also empowered the government.

“He boasted that if we came to his house with 1,000 personnel, hardly would we see 100 that would return. But, he said we shouldn’t come at midnight, and that was why we decided to invade at midnight.

“You know, God likes Igboho, his weakness is that he talks too much. And it is through words that powerful people are caught and ensnared.

“A Yoruba adage says ‘a talkative talks but with no sense’. The man called Igboho talks too much. He has a good plan and ambition, but he talks carelessly. And, his careless talk has ruined his ambition. That was why he fell victim.”

He further said, “Another thing is that his ignorance and arrogance ruined him.”

YOU MAY ALSO LIKE:   Fire Gut Sunday Igboho's House

Listen to the audio here

In another development, an associate of Yoruba Nation agitator Sunday Igboho, Oluwakemi Ifeoluwa, popularly known as Lady K, in a video, has claimed that God revealed to her that there would be many deaths in Nigeria.