Home / cover / ‘I Need Space’ – Portable Cries Out As He Sacks Manager, Promoter And DJ

‘I Need Space’ – Portable Cries Out As He Sacks Manager, Promoter And DJ 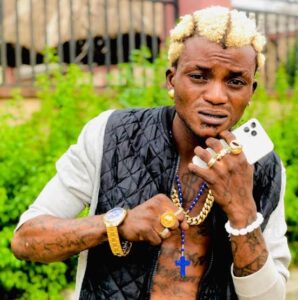 Controversial Nigerian singer, Habeeb Okikiola also known as Portable has announced to the general public that he has relieved his manager, DJ and promoter of their duties.

The zazoo crooner insisted via a video posted on his Instagram handle that his manager, show promoter and DJ does not do anything in building his career and he feels cheated because he pays them.

YOU MAY ALSO LIKE:   Revenue Generation: CBN imposes additional charges on transactions on individual bank accounts

He maintained that he also wanted other people to have a taste of his money therefore the need for new set of people.

Portable who is known to be erratic and quite controversial recently bagged a whopping N50m endorsement deal.

The singer took to his Instagram account to announce that he had signed an endorsement deal of N50m as the brand ambassador of a bitters drink.

He thanked Obi Cubana for giving him the opportunity to market the product.