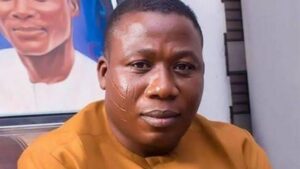 Popular Yoruba nation activist, Sunday Adeyemo (aka Sunday Igboho), has lambasted his Beninese lawyers for failing to stop his detention at a prison in Benin Republic.

Sunday Igboho revealed that some of the lawyers were paid up to five million million (Naira), expressing disappointment that none of them could stop the judge from detaining him despite their large number in court.

This revelation came out after an altercation between the activist and one of his lawyers, Ibrahim David Salami.

Recounting the issue between him and Salami to one of his supporters on phone, Adeyemo explained how he walked out on Salami when he came to see him inside the Benin Republic prison.

According to an audio of the phone conversation between him (Igboho) and the caller, the activist narrated that Lawyer Salami had kept him waiting and he eventually walked out on him.

“Lawyer Salami came to prison to see me, but he kept me waiting, attending to some other people for more than 15 minutes. I called on him, ‘Lawyer, I’m waiting, I’m hungry. I want to go and eat.’

“But he replied me saying, ‘will you be going then’ and and I walked away’. I don’t lie. He was here to see me, not someone else. He should have told those ones that he wanted to see his client. I am not a kid. I will be 50 in October,” Sunday Igboho said angrily.

While the caller tried to persuade Sunday Igboho to make peace with his lawyers because freedom is better than being in captivity, he retorted that:

“If lawyers don’t want to represent me in court anymore, no problem. It is God who knows how I got here. He will set me free. Are those lawyers God? Lawyers that could not tell the judge not to take me to prison, despite how many they were. They were up to 10. In their presence, the judge ordered my detention in prison. Are those ones lawyers? Those who could not remove handcuffs from my hands until Falola came to do so. Are they lawyers? And they collected huge amount of money. Five million, four million, three million (Naira), that was how they were paid; yet they couldn’t remove handcuffs from my hands. I don’t fear any lawyer or anybody. Anything they want to do to me, I’m ready.

YOU MAY ALSO LIKE:   Drama in Zamfara As SS1 Students Kidnaps Principal, Demand N3m Ransom

Igboho was arrested at a Cotonou airport on his way to Germany on June 20, three weeks after the invasion of his house by the DSS.

He has since been detained in a Beninese prison indefinitely for allegedly committing a crime in the French-speaking country.