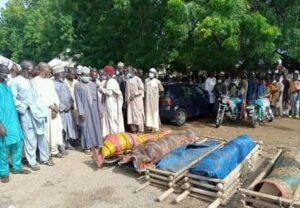 Five youths have reportedly been killed while conveying the corpse of their brother, who died of cholera in Lagos to Sokoto state, Newpremises has learnt.

The deceased were said to be sensational migrants to Lagos state where they worked as scavengers.

It was gathered that the six brothers were living at Ojota, an area said to be worst hit by cholera in Lagos state.

One of them was said to have got infected and died shortly.

A source who confirmed the incident to Daily trust correspondent on Monday, said:

“After his death, they decided to bring his corpse to his hometown, Sanyinna in Tambuwal local government of Sokoto state for burial. They chattered a bus to Sokoto and on their way five more persons got infected and died before their arrival.”

“Another five passengers are currently on admission in Sanyinna Primary Health Centre. The bus was not allowed into the town. We had called and informed the driver to proceed to the facility on arrival which he did,” the source added.

YOU MAY ALSO LIKE:   Police Confirm Kidnap Of Kaduna 85year old Emir By Bandits, Deploy Operatives Into The Bush

According to Alhaji Shehu Abubakar, Ardon Sanyinna said that, the deceased left for a greener pasture in Lagos.

The deceased persons have been buried in accordance with Islamic rites.

May their gentle souls rest in peace.

Previous I Paid Beninese lawyers millions but They Failed To save me from prison – Sunday Igboho
Next #BBNaija: Tega’s Husband Blows Hot, Gives Her New Conditions To Sustain Marriage