“I quit acting due to Kissing roles”- Toyo baby reveals 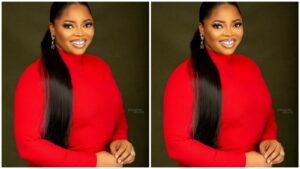 Toyo Baby rose to stardom after being featured in a popular comedy sitcom, known as, “Jenifa’s Diary.” During an interview, Toyo revealed why she had to stop acting.

YOU MAY ALSO LIKE:   June 12: Teargas, gunshots as Lagos protesters storm Ojota

According to her, she stopped acting due to kissing roles. She continued by saying that she’s only going to kiss her husband and not just kissing anyone. She didn’t condemn those who kiss in movies, but it isn’t for her anymore.