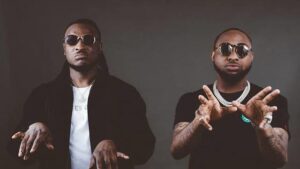 Popular musician, Peruzzi has revealed that he has not gone to church since he met his boss, Davido four years ago.
Although the musician revealed that he believes in God and that his music career started in Assemblies Of God chuch as he was the keyboardist, but have not been to church in a while.
He made it known that long before he became popular, He has always seen himself as a star.
‘’Yeah, Assemblies Of God. Choir, play keyboard, that P. At Assemblies of God, Acappella. If you’re not playing instruments, acapella.
“If you’re playing instruments, it has to be the full thing. Everybody is singing; backing up, harmonizing.
“Treble, alto, tenor, bass. Everybody is doing everything. I learnt to harmonize everything, I learnt to make music sweet. So that was where it (melodies) came from. Childhood experience is the foundation of my whole life.

“I haven’t gone to church since I met David. I haven’t been to church in like four years. But yeah, I believe in God.

YOU MAY ALSO LIKE:   Ecobank Restates Commitment To AfCFTA

“He knew there was a wave. It’s been like that because I always felt like if you know you want to get somewhere, just start preparing yourself for it. [It] wasn’t really fake-fake, ’cause I didn’t rock no fake sh*t. But I faked being a star.”

YOU MAY ALSO LIKE:   Video of Igbo Masquerade Begging Buhari To Free Nnamdi Kanu surfaces online
Meeting Davido Four Years Ago Has Made me Stopped Going to Church - Peruzzi 2021-05-14
Oluwasegun Adesuyi
Share