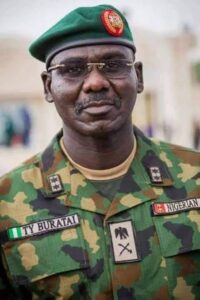 A former Chief of Army Staff and Nigeria’s Ambassador to Benin Republic, Tukur Buratai has denied links to monies and properties recently seized in Abuja by the Independent Corrupt Practices and Other Related Offences Commission (ICPC).
Recall that the ICPC had raided a property in the Wuse 2 area of the federal capital territory (FCT) where it recovered money and other items from the property including N175,706,500, $220,965, a G-Wagon, 2022 editions of BMW and Mercedes-Benz cars and customised mobile phones.

It also recovered several designer wristwatches, including three Rolexes, and some property documents.

YOU MAY ALSO LIKE:   ‘Violence Is Poisonous’ — Will Smith Pens Apology After Slapping Chris Rock At Oscar 2022

Following the raids, reports had emerged claiming Buratai is the owner on the property and the seized items but the agency in a statement stated that the property is owned by the owner of K Salam Construction Company, a military contractor called Kabiru Sallau.

“First, ICPC, in a press release on June 24, 2022, denied any involvement of Lieutenant General T.Y. Buratai with their investigation of the Wuse 2 property.

“Thirdly, a check on the FRSC website on the number plate: ABJ98BH attached to the Mercedes-Benz is false; checks show that the said plate number belongs to a Toyota Corolla custom colour.

YOU MAY ALSO LIKE:   Why we back FG on petrol subsidy removal by 2022 – IPMAN, others

“We, therefore, use this medium to urge restraint on those who are trying to politicise what is purely a matter being investigated.

“With ICPC having cleared the air on this subject matter, it will be preposterous to now try to politicise the matter.”

Previous JUST IN: Lagos Govt shuts Redeemers School over drowning of pupil
Next 2023: Why the Obidient movement is a useless one – Asari Dokubo