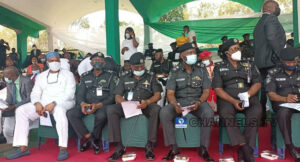 The Inspector-General of Police, Usman Alkali Baba, has flagged off a new Operation codenamed Operation Restore Peace in the Enugu State to contain the rising insecurity in the South-East region.

The event was held on Tuesday at Micheal Okpara Square in Enugu capital city and was attended by Enugu State Governor Ifeanyi Ugwuanyi.

This is coming barely two days after the headquarters of the Independent National Electoral Commission (INEC) in Enugu State was attacked and properties set ablaze by yet-to-be-identified gunmen on Sunday night.

Governor Ifeanyi Ugwuanyi and other top officials at the event.

Six vehicles were razed with two others damaged following the attack INEC office in Enugu.

Also in April, two officers were killed in an attack on a police station in Adani, Uzo-Uwani Local Government Area of Enugu State, raising concerns over incessant assaults on security formations in the South-East region of Nigeria.