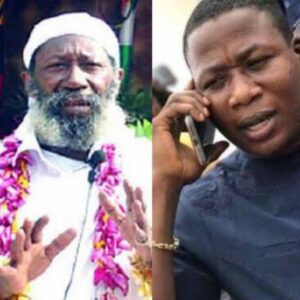 Chief Sunday Adeyemo popularly known as Sunday Igboho has paid a courtesy visit to a popular spiritual leader in Nigeria and the founder of the One Love Family, Sat Guru Maharaj on Sunday at the spiritual leader’s residence in Maharaj ji village, along Lagos/Ibadan Expressway.

Igboho’s visit to Maharaj ji is part of his efforts to seek the support of Yoruba political and religious leaders towards the actualization of the Yoruba Nation agenda.
During the visit, Maharaj ji noted that he fully supports Igboho and prayed for him.
Igboho came to national prominence after he asked Fulani herders to vacate Igangan town in the Ibarapa area of Oyo state.
Recall that Maharaj ji, originally known as Mohammed Ajirobatan Ibrahim, had in February admonished Southwest Governors to honour Igboho for confronting the crisis of insecurity in the region.

Maharaj ji also told the governors to appoint Igboho as the leader of Amotekun in the region.