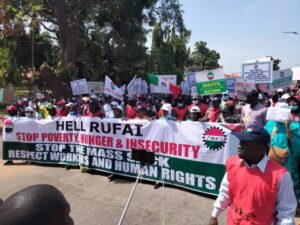 The Nigeria Labour Congress (NLC) peaceful protest in Kaduna State has been interrupted by hired “thugs.”

During the rally, some alleged thugs arrived in two cars, including KEKE NAPEP, and began throwing stones at the demonstrators.

Some of the attackers covered their faces wielded knives and sticks.

“They came in car and started throwing stones on the workers protesting. People started running but the workers were able to chase them away,” an eye witness told Daily Times.

Journalists and some other persons around fled the area. It is not clear those who sent the thugs to disrupt the protest.

During the protest, the striking workers blocked the main road, forcing motorists to divert to other routes.