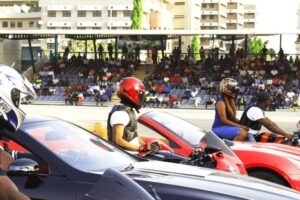 The action followed the full enforcement of Regulation 228 of the Road Traffic Act which prohibits illegal car races and other related offences by the FCT Commissioner of Police, Babaji Sunday.

YOU MAY ALSO LIKE:   THE OSINBAJO, TINUBU COMPARISON BY AYO OLADELE PETERS

The FCT police spokesperson, DSP Josephine Adeh, confirmed the arrest and the number of cars impounded.

She said the suspects were arrested around Muhammadu Buhari way, by Nicon Insurance where they converged for business as usual.

The command had earlier ordered full enforcement of the prohibition of all kinds of car and speed races in the capital territory.

The commissioner had directed all the Divisional Police Officers and their supervisory Area Commanders to ensure full enforcement of the regulation in their respective area of responsibilities.

The order followed public outcry on the menace of reckless driving which poses risk to life and damage to personal property as well as critical national infrastructure.