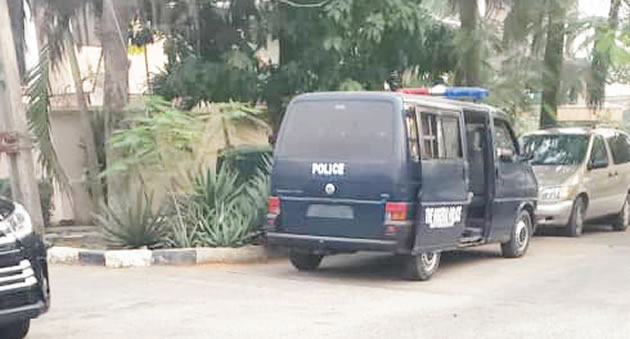 Residents have condemned the attempt by policemen from the Inspector-General of Police Monitoring Team to arrest the Chairman, Peace Valley Zone, Magodo Phase II, Lagos State, Ayobami Olubiyi, on Wednesday 24th of February 2021.

We reliably gathered that no fewer than six policemen, allegedly mobilised by one Timi Popoola, laid siege to Olubiyi’s residence around 6am, but their efforts became futile when some residents in the zone and others intervened.

Olubiyi said despite explaining to Popoola that the estate was strictly for residential purpose, he allegedly shunned the warnings and converted a building to an hotel.

He said, “Mr Timi Popoola bought a property in the estate early in 2020 and we reached out to him to know what he was doing with the property, but he refused to open up to us. We also told him to register with us because of security concerns, but he never shown any concern. When our financial secretary asked him to fulfil his obligations to the estate, he (Popoola) threatened him and we reported the incident at the police headquarters in Ikeja, where he was invited, but he didn’t show up.

“We also escalated it to Alagbon for intervention, but surprisingly, we got a letter last week inviting me to Abuja for harassment, molestation and threat to life. I have never met Popoola, so how could I have threatened his life? When the police came today, they demanded to see me, but I was not at home. When the police kept insisting that they wanted to see me, neighbours, who observed what was going on, mobilised against them.

“The place is a hotel and the Lagos State Government has sealed it off twice, but he broke the seal. He has been advertising the hotel online.”

While condemning the action of the police, the Chairman, Magodo Residents’ Association, Phase II, Bajo Osinubi, said the state government designed Magodo as wholly residential, adding that Popoola was using the office of the IG to oppress people so as to continue running the hotel against the decision of the government.

“We don’t want hotels in Magodo, but this man (Popoola) went to a zone that is very small and started renovating a building. During the renovation, his neighbours approached him to inquire about his plans and he told them that he wanted to live in the building. But after the renovation, residents in the zone started seeing strange faces entering the house. They also went online to do further findings and discovered that he had turned the house into a hotel.

YOU MAY ALSO LIKE:   Buhari Approves Withdrawal Of Nigeria Basketball Teams From International Competitions

“The estate management petitioned the state government and the place was partially sealed off, but he proceeded to inform the Inspector-General of Police. We are surprised that the police invited Olubiyi to Abuja for a case that happened in Magodo, Lagos. Plans were already on for Olubiyi to meet with the IG monitoring unit at the annex in Lagos on Monday, but because he couldn’t make it, six policemen attached to the unit laid siege to his house around 6am Wednesday 24th of February 2021 to arrest him.”

YOU MAY ALSO LIKE:   Musical Prodigy Damian Wan Prays for ‘Table Turn’...+ Video

When contacted, the state Police Public Relations Officer, Muyiwa Adejobi, said “The IGP Monitoring Unit is from the office of the IG, so it’s proper we notify the Force PRO to look into this and react. I will inform him accordingly.”

The Force Public Relations Officer, Frank Mba, had yet to respond to calls and a text message sent to him as of the time of filing this report