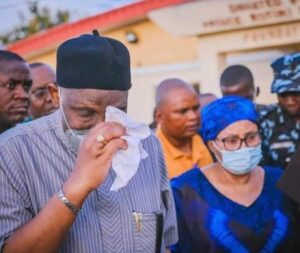 In a statement, IPOB spokesman, Emma Powerful, urged Christians to take their safety and security personally and stop depending on the Nigerian Government.

The statement by Powerful reads partly: “We the global movement and family of the Indigenous People of Biafra (IPOB) under the command and leadership of our great leader Mazi Nnamdi Kanu condemn the Fulani terrorist’s attack on Catholic Church in Owo Ogun state today been Sunday 5th of June 2022.

“IPOB had repeatedly suggested that Christians should stop their dependence on the Government of Nigeria for the security of life and properties; the reason is that the current regime has only one interest and that is Fulani’s interest. Fulani terrorists masquerading as politicians and security agents are the ones heading Nigeria Army, Police and other security agencies and are responsible for the recruitment of terrorists who were massacring innocent Christians, Muslims and Non-Muslims.

“We are equally advising the Christian Association of Nigeria, CAN, to stop condemning attacks from these terrorists from the Sahel or praying for God’s intervention and start acting in defence of Christians in Nigeria. “CONDEMN” do not raise people from graves; therefore, we suggest again to the Christian Association of Nigeria CAN that the only remedy is to be prepared to withstand the terrorists and jihadists who were sponsored by unfortunate politicians and the Government of Nigeria to eliminate every citizen in the country.”

Previous Plastic Surgery: Nkechi Blessing Reveals Reason Women Work On Their Bodies
Next BREAKING: S/West Leaders Mount Pressure On Osinbajo To Step Down For Tinubu As Fayemi May Drop For VP