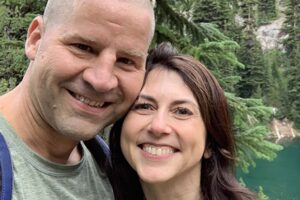 MacKenzie Scott, one of the richest women in the world, is off the market. The very private billionaire, who divorced Amazon founder Jeff Bezos after 25 years of marriage, has quietly wed Seattle teacher Dan Jewett, according to a blog post from the groom.

It’s unclear when the newlyweds tied the knot; Scott could not be reached for comment. The news trickled out Saturday after Jewett posted on Scott’s Giving Pledge page, and was first reported in the Wall Street Journal.

“I have been a teacher for the majority of my life, as well as a grateful student of the generosity of those around me,” he wrote. “This has meant doing my best to follow their example by passing on resources of all kinds — from time, to energy, to material possessions — when I have had them to give. And now, in a stroke of happy coincidence, I am married to one of the most generous and kind people I know — and joining her in a commitment to pass on an enormous financial wealth to serve others.”

YOU MAY ALSO LIKE:   Adesola Adeduntan to be honored as Forbes Best of Africa

Scott, 50, received $36 billion when her divorce was finalized two years ago. The fortune has grown to an estimated $53 billion, most of which the novelist and philanthropist has pledged to give away. Scott’s personal wealth has grown significantly during the pandemic, along with Amazon’s share price. “This pandemic has been a wrecking ball in the lives of Americans already struggling,” she wrote in a Medium post in December. “Meanwhile, it has substantially increased the wealth of billionaires.”

YOU MAY ALSO LIKE:   Offerings is Necessary but not Compulsory - Prophet T.B. Joshua

Scott shared the happy news on her author bio on Amazon’s website: “She lives in Seattle with her four children and her husband, Dan.”

In a gracious note, Bezos (who also owns The Washington Post) seems genuinely thrilled for his ex-wife: “Dan is such a great guy, and I’m happy and excited for the both of them,” he said in a statement.

It also appears that Jewett’s days in the classroom are over. In his posting, Jewett said he and Scott “are united in that understanding and in our excitement for all we have to learn from so many people working in service of others. With that as a foundation, I join with the kindest and most thoughtful person I know in making this pledge, grateful for the exceptional privilege it will be to partner in giving away assets with the potential to do so much good when shared.”