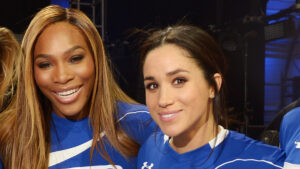 The tennis superstar took to Instagram Sunday night to speak out following Oprah Winfrey’s explosive interview with the Duke and Duchess of Sussex: “I want Meghan’s daughter, my daughter and your daughter to live in a society that is driven by respect.”

When Serena Williams battled Simona Halep in the women’s final at Wimbledon on July 13, 2019, looking on from center court was Duchess of Cambridge Kate Middleton seated next to Duchess of Sussex Meghan Markle.

When not focused on the back-and-forth on the grass, the two were seen smiling and engaged in conversation. The image of the two beaming royals — one a seasoned vet and the other, still navigating her way through the family firm — made international headlines because the outing followed a spate of negative stories accusing Markle of making Duchess Kate cry during a dramatic family rift.

The match, and those images of a seemingly friendly pair, became a subject of conversation Sunday night during Oprah Winfrey’s bombshell CBS special, Oprah with Meghan and Harry: A CBS Primetime Special. Markle countered the many tabloid claims by saying she ended up in tears after Duchess Kate got upset over dresses for the flower girls at Prince Harry and Markle’s 2018 nuptials.

“That’s when everything changed,” Markle said, claiming that after the bad press made its way into the world, the Palace’s communications team did nothing to protect her from what she said was a false narrative. “A few days before the wedding, she was upset about something with the flower girl dresses. It made me cry and it really hurt my feelings. In the context of everything going on, it didn’t make sense to not just be doing whatever else was doing was to be supportive.”

But what about that day at Wimbledon, Winfrey asked? She wanted to know whether Duchess Kate was embracing her or being helpful as she was finding her way in this new royal reality, especially at an event like Wimbledon when Markle was supporting a champion on the court. Though Winfrey didn’t mention Williams by name, she said “your friend” to Markle as it’s widely known that the two are close friends. Williams even attended Prince Harry and Meghan Markle’s wedding. Markle said that while everyone welcomed her, “it’s nothing like what it looks like.”

After the two-hour special aired, Williams took to Instagram to show support for “my selfless friend” Markle. “She teaches me every day what it means to be truly noble. Her words illustrate the pain and cruelty she’s experienced,” read the post. “I know firsthand the sexism and racism institutions and the media use to vilify women and people of color to minimize us, to break us down and demonize us. We must recognize our obligation to decry malicious, unfounded gossip and tabloid journalism. The mental health consequences of systemic oppression and victimization are devastating, isolating and all too often lethal.”

During her interview, Markle told Winfrey that after experiencing racism, intense tabloid scrutiny and negative headlines, and a lack of protection from the institution’s publicity arm, she was plagued by thoughts of suicide. At her breaking point, Markle told Prince Harry she was having thoughts of self-harm and she hoped to check into a facility but was told that was not possible by Palace officials.

“I want Meghan’s daughter, my daughter and your daughter to live in a society that is driven by respect,” Williams said of Markle, now expecting a baby girl to join the couple’s son Archie. “Keep in your memory the fruitage of the spirit is love, joy, peace, long-suffering, kindness, goodness, faith, mildness, self-control. Against such things, there is no law.”

YOU MAY ALSO LIKE:   Vertigo Africa: Join the Evolution

Williams was not the only celebrity to speak out following the interview which was trending on Twitter and will deliver much discourse in the days to come as it airs in England Monday night. Winfrey is also appearing Monday morning opposite longtime friend Gayle King on CBS This Morning to show new clips that didn’t make Sunday’s final cut.

Amanda Gorman, the inauguration poet who became an overnight sensation, also shared words with her 1.5 million followers on Twitter. “Meghan was living the life Diana should have, if only those around her had been as brave as she was,” Gorman said, in reference to Prince Harry’s late mother. “Meghan isn’t living a life without pain, but a life without prison. This isn’t Meghan’s princess ‘happy’ ending. But sometimes change, the decisions that bring us the most hurt, aren’t about happiness but healing.”