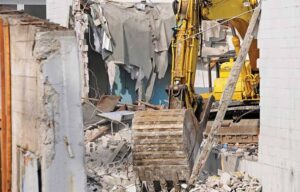 This was in accordance with Gov Chukwuma Charles Soludo’s directive that criminal hideouts be destroyed to curtail the increasing criminal cases in the state.

Christian Aburime, press secretary to the governor, said weekend that the hideout was earlier raided, adding that a locally made pistol, shrine, charms, concoctions, indian hemp, among other incriminating materials were recovered at the building with some arrests made.

The state has become notorious for criminal activities, with the most recent one being the beheading of a state House of Assembly member some weeks ago.

The husband of the late DG of NAFDAC, Prof Chike Akunyili, was also killed in the state by a criminal gang cod-named ‘unknown gunment’.