Home / cover / AFCON2023: Jose Peseiro Pleads With Nigerians To Give Him More Time With Super Eagles

AFCON2023: Jose Peseiro Pleads With Nigerians To Give Him More Time With Super Eagles 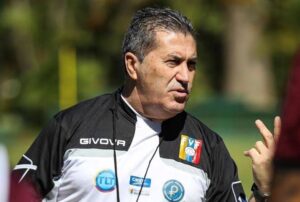 Jose Peseiro, the newly appointed Super Eagles coach, has asked Nigerians to give him enough time to build a ‘formidable’ team, after Nigeria’s 2-1 win against Sierra Leone in the opening fixture of the 2023 AFCON qualifiers.

The Portuguese has had a difficult start after losing his first two games against Mexico and Ecuador in an international friendly.

YOU MAY ALSO LIKE:   Nigerian Celebrities Who Joined Shettima’s Challenge

In the game against Sierra Leone, the Super Eagles came from behind after conceding in just 11th minute of the game due to a defensive error.

The three-time African champions responded well as goals from Alex Iwobi and Victory Osimhen was enough to get all three points.

Tags AFCON2023: Jose Peseiro Pleads With Nigerians To Give Him More Time With Super Eagles