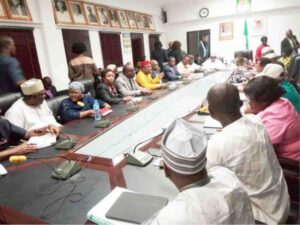 Recall that ASUU has been on strike since February over funding of the revitalisation of public universities, Earned Academic Allowances, University Transparency Accountability Solution (UTAS) and promotion arrears and the renegotiation of 2009 ASUU-FG Agreement and the inconsistency in the Integrated Personnel Payroll Information System.

YOU MAY ALSO LIKE:   COZA Pastor, Biodun Fatoyinbo Celebrates Mum @77

ASUU President, Prof. Osodeke, and his team were on Saturday morning invited by the host of Berekete Family radio, Ahmad Isah, popularly known as Ordinary President.

According to DailyTrust, ASUU President was invited to explain to Nigerians the problems and reasons the union is still on strike.

YOU MAY ALSO LIKE:   Nimasa Boss Calls for thorough Probe into N1.5tn allegation levelled against him

Isah also said that he had set up a special intervention bank account domiciled in TAJ Bank to raise funds for the union, with a view to ending the strike.

To convince ASUU to buy into the idea of the intervention, Isah publicly showed the N50 million cash donated by Governor Udom Emmanuel of Akwa Ibom State.

Immediately after the money was displayed, ASUU President frowned at the development, saying they should not be associated with such.

At that point, Isah threatened to discontinue the intervention and many Nigerians who phoned in during the programme described ASUU as ”insensitive”.

Previous Why Northern Governors Picked Tinubu Over Osinbajo – El Rufai Reveals
Next AFCON2023: Jose Peseiro Pleads With Nigerians To Give Him More Time With Super Eagles