Home / cover / JUST IN: APC National Chairman Accuses Governors Of Working Against Him

JUST IN: APC National Chairman Accuses Governors Of Working Against Him 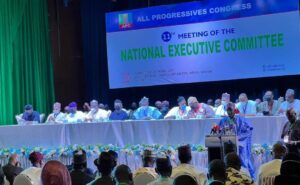 National Chairman of the All Progressives Congress, APC, Abdullahi Adamu, has accused some governors of working at cross purposes with the leadership of the party, stressing that it could affect the party’s chances in the 2023 elections.

Adamu stated this at the opening of the National Executive Committee meeting of the party in Abuja on Wednesday.

YOU MAY ALSO LIKE:   MAUREEN BADEJO SUFFERS ANOTHER HISTORIC DEFEAT AS SHE LOSES APPEAL AGAINST MFM IN THE UK

The meeting is the first since the new NEC emerged weeks ago to pilot the affairs of the party.

The meeting is being attended by President Muhammadu Buhari, Vice President Yemi Osinbajo, Senate President Ahmad Lawan, House Speaker Femi Gbajabiamila, and other critical stakeholders who are members of the NEC.

All elected NEC members and governors under the platform of the party are also in attendance.

While acknowledging that state governors are leaders of the party in their states, Adamu said the APC constitution does not have provision for dual leadership in the states.

He called for recognition of his position as contained in the party’s constitution and not dualism in leadership.

YOU MAY ALSO LIKE:   Driver jailed 1 month for stealing 14 cartons of ”Indomie” noodles

Tags JUST IN: APC National Chairman Accuses Governors Of Working Against Him