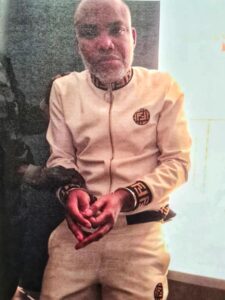 Society gazette reports that IPOB Leader, Nnamdi Kanu has been barred from having access to his lawyers and family members.

This was made known by Deji Adeyanju who stated that the human rights of Nnamdi Kanu is being withdrawn due to the restrictions made by the DSS.

He also suggested to the lawyers that they should ask the court to transfer him to prison instead of DSS Custody.

Kanu’s lawyers must insist that he be transferred from DSS custody to prison on the next court date to stop the violations of his rights. They have also denied him access to his lawyers and family members. This is another major human right violation.

Previous Motorcyclist Cries Out After Passenger He Carried Stole His Manhood In Lagos
Next Iyabo Ojo Bows To Pressure, Begs TAMPAM For Forgiveness Over Nollywood Ban