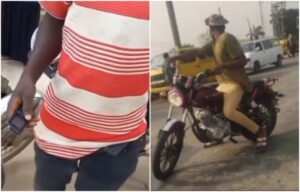 A commercial motorcyclist has cried out for help after the passenger he carried allegedly stolen his manhood in Lagos
In the video that was shared on social media, the motorcyclist was surprised after he noticed his private organ wasn’t thereafter he dropped a yet to be identified passenger at his destination in Lagos..

The motorcyclist was seen in a viral video explaining that the man he carried is a “big man.” It was also gathered that the incident occurred in Ifako area of Lagos state.

YOU MAY ALSO LIKE:   Nigerians Not Interested in 2023 Elections But In Separation - Fani Kayode Makes Shocking Revelation
Motorcyclist Cries Out After Passenger He Carried Stole His Manhood In Lagos 2021-07-01
Oluwasegun Adesuyi
Share