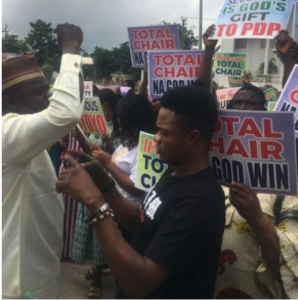 The embattled National Chairman of the Peoples Democratic Party, Uche Secondus and his supporters have stormed the headquarter of the party.

It was gathered that Secondus who has lost the support of governors elected on the platform party entered his office at 9.51 am ahead of the National Working Committee meeting.

This is coming after a Kebbi High Court reinstated Secondus as chairman of the party on Thursday.

Recall that a Rivers State High Court last week restrained Secondus from parading himself as National Chairman until the determination of the substantive suit.

The spokesman of the party, Kola Ologbondiyan, disclosed this on Thursday after the closed-door meeting of the National Working Committee (NWC) of the party in Abuja.