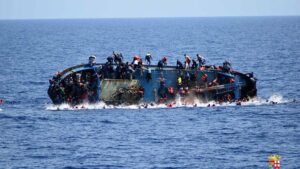 A fighter helicopter has reportedly shot a wooden passenger boat travelling from Port Harcourt to Bonny in Rivers State.
It was gathered that many occupants who were severely injured have been rushed to the hospital for treatment.

An eye witnesses at the Bonny-Nembe waterside where the boat took off from in Port Harcourt, disclosed that there were casualties.

The witness stated that the wooden boat conveyed passengers and foodstuff, PUNCH reports.

“The local boat that just left here to Bonny, within the Treasure Island area, a chopper or I will call it a flight helicopter, just came behind, went very low and started shooting at the wooden boat.

“From the information we got from a boat driver, there were passengers in the boat. The boat also contained foodstuff such as garri, rice and other items.

“Everyone knows that is the route transporting foodstuff to Bonny. Some people died in the boat,” he claimed.

Various security agents however failed to confirm the incident.

The state Police Command spokesperson, Nnamdi Omoni, denied knowledge of the attack, while the spokesman of the Army and his counterpart in the Nigerian Air Force, Port Harcourt, did not respond to calls.