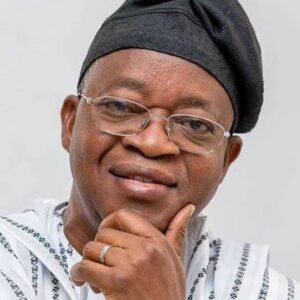 The Osun governor election slated for Saturday, July 16, may not be a walk in the park for Governor Gboyega Oyetola and the All Progressives Congress (APC). The reason is that some APC members, even leaders, have diverted their support to Akin Ogunbiyi, the candidate of the Accord Party (AP), The Nation reports.

Not less than 50 influential APC chieftains who are leaders in various capacities have thrown their weight behind Ogunbiyi ahead of the election, describing him as the one who truly possesses the qualities of a good leader and has an enviable vision for the state.

Confirming this new development, the AP gubernatorial candidate¡¯s media aide, Seun Adeoye, disclosed that the APC bigwigs in the state made their position known when they paid his principal a visit in Osogbo recently.

Reacting to the support he was assured of by the APC leaders, Ogunbiyi noted that he will not fail them. A statement released by Adeoye quoted Ogunbiyi as saying: ¡°I promise to lift this state out of the monolithic economy as a ¡®civil servant state¡¯ by making use of its abundant resources in agriculture, mineral resources, and the large human capital deposits.

YOU MAY ALSO LIKE:   HR People Magazine clocks 10! Participate in the 7th Edition of the Awards

¡°I will fully engage in all sectors of agriculture including crop production, livestock, forestry, and fishing, and make the state the food basket of the entire Southwest. ¡°Agriculture is a multi-billion dollar investment.

We can produce another Awolowo, somebody who has the intellect, capacity, and experience to develop something little to something bigger. I will go all out to be that person.¡±

Previous JUST IN: Winner To Get N100m Prize As Big Brother Naija Season 7 Begins July 23
Next Obama Calls For More Access To Abortion In US