Home / cover / Obama Calls For More Access To Abortion In US

Obama Calls For More Access To Abortion In US 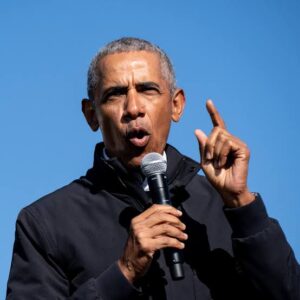 Former United States president, Barack Obama has stated that increased access to abortion is one of the signs that the American democracy was growing.

He lamented on Tuesday that there is still work to do in areas of abortion rights, gun control and LGBTQ rights, among others.

“If we want democracy to flourish, we will have to fight for it. We’ll have to nurture it. And we will have to demonstrate its value, again and again, in improving the lives of ordinary people.

“That includes looking at the shortcomings of our own democracies—not the ideal, but the reality of our own democracies. From advocating for increased abortion access to protecting LGBTQ+ rights to tackling gun violence and so much more, we have a lot of work to do. Only then will we be able to tell a better story of what democracy can be, and must be, in this rapidly changing world.”

The former president’s remark is believed to be his opinion pointing towards the country’s independence Day celebration on July 4 .

Also, his remarks comes after the US Supreme Court removed abortion from list of federal rights.

The Supreme Court verdict drew outrage from a number of US citizens but was hailed by several churches.

YOU MAY ALSO LIKE:   Sunday Musings: My Position on Bola Ahmed Tinubu (BAT) - Prof Bolaji Aluko

US president Joe Biden described the verdict as being against the constitutional right of Americans.

Tags Obama Calls For More Access To Abortion In US