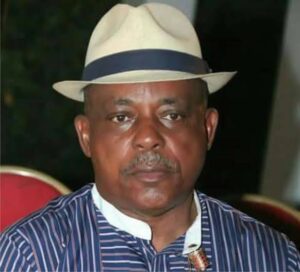 Prince Uche Secondus has been suspended by the Peoples Democratic Party (PDP) Ward 5 in Ikuru town, Andoni LGA of Rivers State.
Secondus who hails from Andoni was a former Chairman of the PDP in Rivers and a former National Organising Secretary of the party.

Secondus suspension was announced on Wednesday by the Ward Chairman of the Party, George Christopher, during the extraordinary meeting at the party’s Secretariat at Ikuru town, Andoni.

According to Christopher, eleven out of the 17 executive members endorsed Secondus suspension from the party.

He stated, “The Ward executive of the Peoples Democratic Party in Ward 5, Ikuru town, and the leaders met on the 31st of August, 2021 issues that affect the party.

“Suspension of Prince Uche Secondus was done by the Ward executive after a duly constituted Ward meeting called by the Secretary on the instructions of the Chairman, according to the Constitution of our great party.”

Also speaking, former chairman of Andoni LGA and chairman, Disciplinary Committee in the Ward, Benson Alpheous, said Secondus was suspended for disobeying the party’s decision for him to step down as national chairman.

“Until further notice, our brother, Prince Uche Secondus remains suspended. I want to thank you for coming and again, reaffirm the suspension of Uche Secundus.

YOU MAY ALSO LIKE:   Fidelity Bank appoints Nneka Onyeali-Ikpe MD-designate

“For now, until you hear from us again, Prince Uche Secondus remain suspended,” he added.