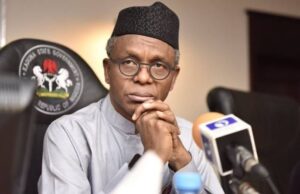 Kaduna State Government on Saturday said the attack by suspected terrorists was repelled by those around the precinct of its International airport.

The information was contained in a statement signed by the State’s Commissioner of Internal Security and Home Affairs, Samuel Aruwan.

Armed men had reportedly invaded the airport earlier on Saturday, disrupting the operation of the airport services.

The incident had caused the death of a staff member whom the state government revealed to have been shot by the assailants.

“However, the bandits, unfortunately, shot and killed a staff member stationed at the perimeter fence who raised alarm on sighting them,” the statement read.

He also noted that the airport operations had resumed with scheduled flights departing after the incident.

Aruwan further said security forces were conducting operations in the airport general area, and “further updates will be communicated to the public”.

Governor Nasir El-Rufa’i, who commended the security forces for their prompt response to the attack, and for repelling the attackers, expressed sadness at the report of the casualty.

He sent condolences to the family of the victim, offering prayers for the repose of his soul.

Kaduna has witnessed a trajectory of attacks in recent times, with non-state actors devising new strategies to perpetrate evil and its agenda in the state.

Notably, among its recent strategies are the planting of explosives randomly across the state; a situation the state government had raised an alarm about and had asked its residents to be cautious and vigilant of their environment.

Previous Why We Are Supporting Security Agencies – Alhaji Ogunbiyi
Next Fulani Armed Men Cut Off My Two Hands, Fled With My Gun – Oyo Security Man