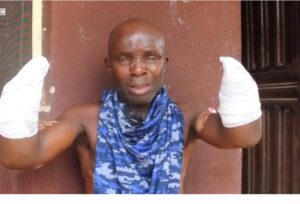 A vigilante member in Itasa community in Iwajowa Local Government Area of Oyo State, Amodu Abubakar, has narrated how he lost his two hands in an attack by some armed robbers suspected to be Fulani.

Abubakar, who is an indigene of Itasa, said the two suspected armed robbers attacked him while he was riding a motorcycle.

He said this in an interview with THE WHISTLER on Saturday.

Narrating how he was attacked, he said he was going back to his duty post and was riding a motorcycle when the incident happened on March 13. He said his attackers also rode on a motorcycle and suddenly pounced on him and cut off his two hands and took away his gun.

Abubakar said he trekked some kilometres before he was rescued and taken to hospital where he is still receiving treatment.

He said, ” Look at my hands, I can no longer use them for anything, I can’t even feed myself again. Somebody has to feed me now whenever I want to eat.

“I cannot remove my trousers. I cannot do anything for myself. They have rendered me useless.”

A son of the victim, Ahmed, who also spoke in an interview with our correspondent on telephone said the case was reported at the police station the same day his father was attacked.

He said the incident happened about two weeks ago adding that the police investigators had come to ask his father some questions concerning the attack on the hospital bed.

He said residents of the town and those living in nearby towns had launched manhunt for the attackers, saying the attackers’ target was the locally made gun which they snatched from his father after cutting off his hands.

The son said, “My father is still receiving treatment at hospital in Iwere Ile. He is devastated like we his children and family because of what happened. But we are trying our best to give him the assurance that he could still use his hands if we can raise money for him to buy artificial hands.

“He doesn’t want to be a burden to anybody and that is why he is happy about the prospect of using artificial hands.

“We are begging members of the public and the government of Oyo State and Nigeria to help us. My father can still.be useful if he can get the artificial hands but be needs financial help to buy them.”

The Police Public Relations Officer in Oyo State, Adewale Osifeso, could not be reached for his comment on the incident.