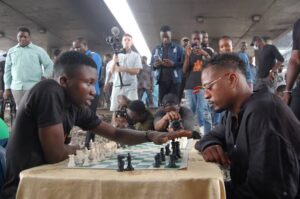 Patrice Evra, the Manchester United football legend, on Saturday visited the under bridge axis of Oshodi in Lagos.

During the surprise visit, the 40-year-old was seen playing chess with students of Chess in slums Africa.

Chess in slums Africa is a non-profit organisation known for using the game as a framework to promote education and raise champions from low communities.

In one of the video clips, the ex-France international was welcomed by a jubilant crowd, with many of them chanting his name.

He was also seen donning a Yoruba traditional cap with smiles etched on his face.

In a terse post via his Twitter page, the football star expressed his excitement at visiting Nigeria and sharing the unique moments with the children.

Tunde Onakayo, founder of Chess in slums Africa, had earlier teased fans about his visit but did not disclose his name.

YOU MAY ALSO LIKE:   Buhari: Fulani Planning To Take Over Nigeria, I Have Genuine Proof – Gov Ortom

“A Manchester United legend/former captain and a UEFA Champions league winner will be coming to play Chess against some of the kids in our academy at oshodi underbridge,” he had announced on Thursday.

The development comes a few weeks after Kevin Tokar, acting Canadian high commissioner to Nigeria, and his team also visited the area.

Onakoya has become a viral sensation across social media platforms since he initiated Chess in slums Africa.