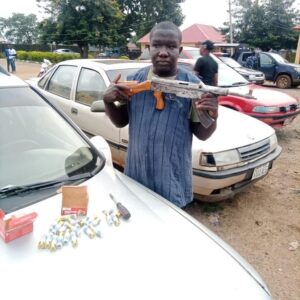 The Kaduna State Command of the Nigeria Police has arrested a notorious gun runner identified as Geoffrey Ayuba.

The suspect was arrested by operatives of the Kafanchan Divisional Headquarters on Wednesday, 28th July based on credible intelligence.

Ayuba was intercepted while driving his Opel Vectra vehicle with registration number KAF 733 MK and when a search was conducted, various dangerous weapons were found hidden in the car bonnet near the engine compartment.

According to the State Police Public Relations Officer (PPRO), ASP Muhammed Jalige who confirmed the incident in a statement, one AK-47 rifle and two packs of pump-action cartridges were hidden in the bonnet of the suspect’s car.

YOU MAY ALSO LIKE:   Dangote, Al-Makura, Okocha, Others Get Nasarawa University’s Honorary Doctorate Degrees

Jalige, said: “The Operatives of the Kaduna Police Command attached to Kafanchan Divisional Headquarters on July 28, 2021, at about 1600hrs while acting on reliable information from a good samaritan, intercepted an Opel Vectra vehicle with registration number KAF 733 MK driven by one Geoffrey Ayuba ‘m’ of Unguwan Rimi Kafanchan in Jema’a LGA of Kaduna State.”

The statement further said that weapons concealed in the engine compartment of the car were recovered by the operatives after a careful search of the vehicle.

“Investigations are ongoing as the suspect has provided useful information to the Police that will facilitate further breakthroughs,” the statement added.

Meanwhile, the Kaduna State Government has filed fresh charges against the leader of the Islamic Movement in Nigeria (IMN), Sheik Ibrahim El-Zakzaky.

YOU MAY ALSO LIKE:   FrieslandCampina WAMCO Gets New App for Dairy Farmers

Recall that Justice Gideon Kurada of the Kaduna State High Court had discharged and acquitted El-Zakzaky and his wife, Zeenat of all charges levelled against them.

The judge ruled that the charges against El-Zakzaky and his wife were not supposed to be filed, as the state government cannot arraign someone for a crime that was not an offence at the time.