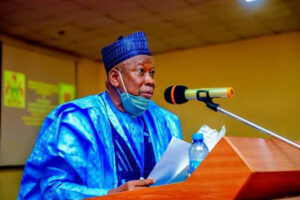 In what appears like a conscious effort to prevent himself from losing political relevance after leaving office in 2023, Kano State Governor, Abdullahi Ganduje, has called for “peace and reconciliation among political parties’ stakeholders” in the state.

Governor Ganduje made the call in his New Year message to the people of Kano State issued by the state’s commissioner for information, Muhammad Garba, on Friday.

In the message titled “Year 2022 era of reconciliation, peace building,” Ganduje expressed optimism that political parties in the state would create platforms for internal democracy to flourish.

The governor urged political parties to “produce more credible representatives at various levels who have the capacity and ability to win elections and subsequently build on laudable programs and policies initiated by the past leaders.”

Ganduje said “political gladiators” in the state already made efforts recently to usher in a new dawn in political history of the state.

According to Garba, the governor said “the event, which saw Kano political gladiators emphasizing on the need for reconciliation, elicited excitement from the people of Kano state who have been yearning for the much-needed peace and conciliation in order to advance the cause for proper development in the political terrain and the society at large.”

THE WHISTLER recalls that Ganduje’s appeal for peace and political reconciliation in Kano came a month after an FCT Federal High Court sacked the Kano All Progressives Congress executive committee led by him and recognised the faction led by Senator Ibrahim Shekarau, a former governor of the state and his political rival.

Amid the rift, the governor’s Special Adviser on State Affairs, Muhammad Shehu, had on Tuesday resigned his position and joined Shekarau’s APC faction to support the governorship ambition of Barau Jibrin, the chairman Senate committee on appropriation.

YOU MAY ALSO LIKE:   I Paid Beninese lawyers millions but They Failed To save me from prison – Sunday Igboho
Gov Ganduje Calls For Peace KANO: After Losing Political Battle To Shekarau Reconciliation 2021-12-31
Oluwasegun Adesuyi
Share